The only large scale survey of the wildlife population on Koh Chang was undertaken in 1992.

It was found that the Mu Ko Chang National Park has 29 species of mammals. This includes: wild boars, deer, monkeys, monkeys, lemurs, common mongoose, bats, squirrels and rats, among others.

In addition, 74 species of birds are permanent and non-migratory in Thailand. The rarest of which are the handful of Oriental Pied Hornbill that nest deep in the jungle and are rarely seen. Of these 61 are seabirds. There are also migratory birds such as Pacific Swallows.

There are also have 42 species of amphibians and reptiles: including deadly king cobras, pythons, Malayan Mud Turtles, Monitor Lizards and the rare Koh Chang frogs.

The interior of Koh Chang is tropical rainforest. As such it has a great variety of plants. Most of the natural plants are plants of the genus Phanea and the Wa genus.

In addition there are types of plants that have been imported from elsewhere and are not native to the island. Eg rubber, Takhianthong, Phaya Mai, Phaya Lao, Chaon, Wai Toei, bamboo orchids, cardamom, etc.

There are mangroves around the coasts which in Salakphet , Salakkok, Klong Son and Klong Prao. A variety of different species of mangrove can be found here. For example Malabar, Saraphi Thale, Samet toey, etc.

The islands south of Koh Chang, in the Mu Ko Chang National Park, are far enough from the mainland that their shores do not accumulate sediment from rivers on the mainland.

For more information of animals that have been spotted by visitors on Koh Chang, please see http://kohchangnature.com 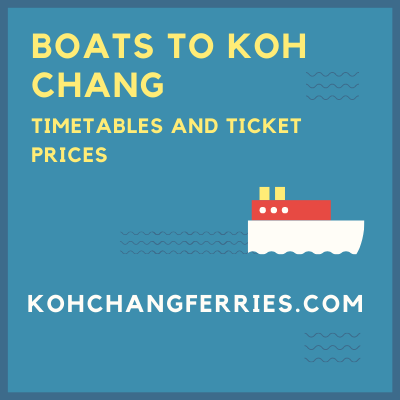